Life isn’t perfect, but atleast we’ve got Nutella! I love anything and everything with Nutella. If you too are a Nutella addict and also happen to be into baking, this is a super easy recipe you have to try… and you only need 3 ingredients (yes, one of these happens to be Nutella!). 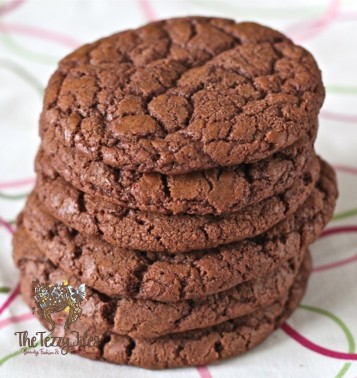 END_OF_DOCUMENT_TOKEN_TO_BE_REPLACED

Do you suffer from an incurable sweet-tooth and and always find yourself reaching out for a handful of naughty treats? I have a super quick and easy recipe for you… and its not even close to being naughty!

All you need is dates and coconut, and stored in an airtight container in the fridge, these little treats will last over a month (unless you gobble them up beforehand ofcourse!). Best of all this recipe is gluten-free, made of all-natural ingredients, and is high in fiber. You get the jazz… super healthy, super quick without the hefty price tag to boot! 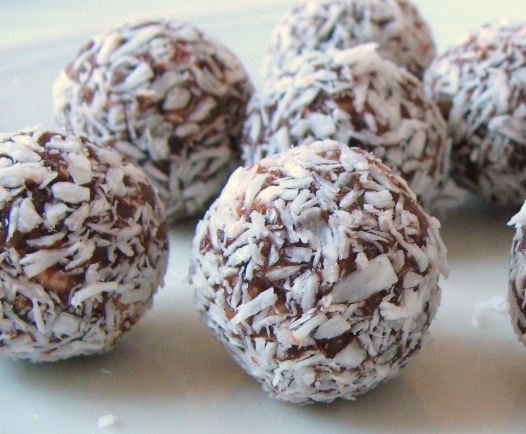 END_OF_DOCUMENT_TOKEN_TO_BE_REPLACED

This wee bowl might look like a pile of poop, but let me tell you its absolutely loaded with a truck-full of healthful goodness. To top it off, its a super easy 2-ingredient recipe that you can easily whip up for a breakfast on the go.

END_OF_DOCUMENT_TOKEN_TO_BE_REPLACED

I’ve been raving about my dinner at Siraj, the Emirati restaurant with a contemporary twist located in Souk Al Bahar, Downtown Dubai. One of the decadent desserts I had the pleasure of tasting was their Luqaimat, a well loved Emirati delicacy of deep fried dumplings. 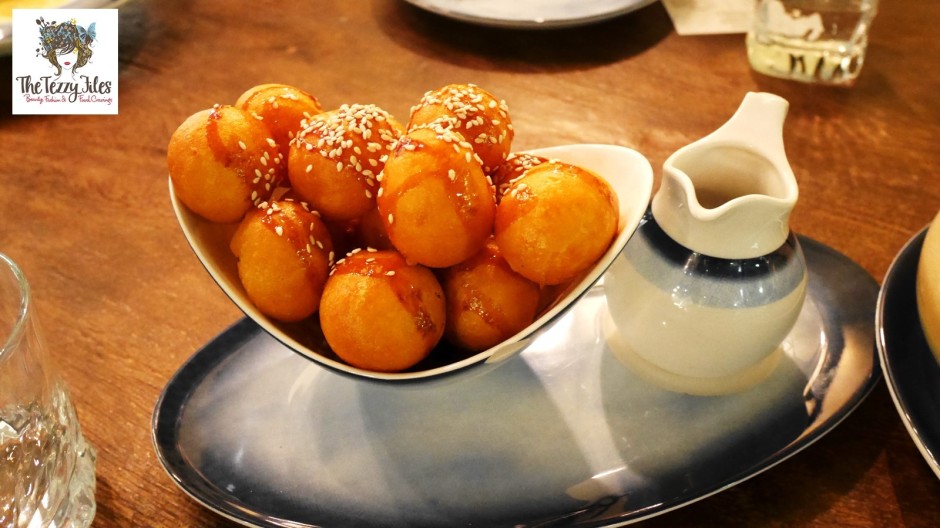 Crisp on the outside and dreamily soft inside, with the delicious flavours of cream, sugar and cardamom kicking in with every mouthful, these delicious plump little pillows truly are hard to resist – in fact why resist at all?

END_OF_DOCUMENT_TOKEN_TO_BE_REPLACED

Black Rice is an exotic, healthful alternative to ordinary white rice. It is high in fiber, and has a beautifully nutty aftertaste. You might have noticed the Black Rice Pudding I had at Thiptara in my Instagram feed, it gave the traditional Thai Sticky Rice & Mango Pudding a delicious upgrade!

I discussed this with my sister in-law, Sharmin Pasha (you met her earlier here). Sharmin is the creator of the very popular Facebook page Assamese Cuisine and Recipes. This is a page dedicated to the indigenous cooking styles of Assam, the North Eastern state of India from where my family and I originate.

I was under the impression Black Rice is only used in Thai cooking. Sharmin tells me it is just as popular in the North Eastern regions of India, even beyond Assam. Today’s article is a guest post by Sharmin Pasha. Read on about the fascinating attributes of Black Rice, the ‘forbidden food’, and try out Sharmin’s Black Rice recipes (two are traditional Assamese recipes that would be perfect for the upcoming Assamese Bihu festival. The other is an innovative take on the traditional Thai Mango & Sticky Rice Pudding, and the fourth is a traditional Manipuri Black Rice Bread to enjoy with a piping hot cup of tea!).

END_OF_DOCUMENT_TOKEN_TO_BE_REPLACED

Happy National Day! I hope you are having a lovely Wednesday, and looking forward to the patriotic festivities of this lovely, breezy long weekend.

A big ‘thank-you’ to all of you who took part in the Seven Sands contest. I wish I could take you all to this stunning new Emirati restaurant, but there can only be one winner. Congratulations once again @tulip_dsilva I hope you enjoy Seven Sands as much as I did.

For those of you who want to try out Seven Sands, look up their details on my previous post and give them a visit. Or you can try recreating two of their star dishes all by yourself!

Seven Sands has generously shared their prized recipes for Humeidh with Green Mango Salad and Maleh Korse (baked Emirati fish parcels). What better way to spend the National Day weekend than creating a bit of Emirati goodness in your very own kitchen? 🙂

END_OF_DOCUMENT_TOKEN_TO_BE_REPLACED

Hosted by the very lovely Chef Melanie Smith who holds the designation of Global Pastry Chef for the Food Fund International group of restaurants, the event was predominated by click-happy chocaholic bloggers who couldn’t wait to get their hands dirty and morph into truffle-making geniuses! 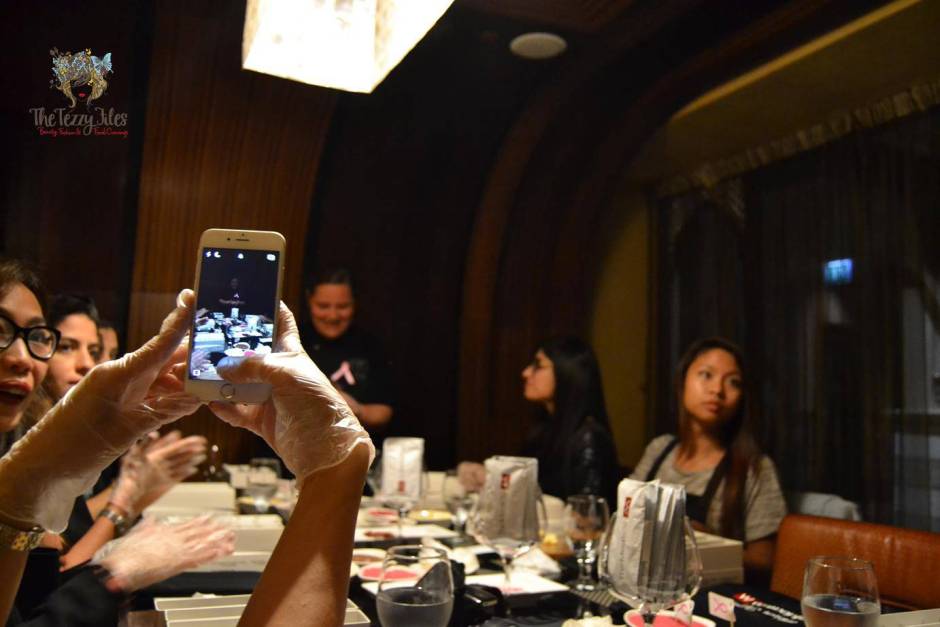 END_OF_DOCUMENT_TOKEN_TO_BE_REPLACED

You met the sauve Chef Richard of Max restaurant on The Tezzy Files earlier. Today, he has kindly agreed to share one of his favorite authentically Filipino recipes with us: Nilagang Baka sa Buko.

This is a slow-cooked beef short-ribs broth with buko (or young coconut) juice. A decadent comfort food that’s so easy to make, I hope you will give this recipe a try. 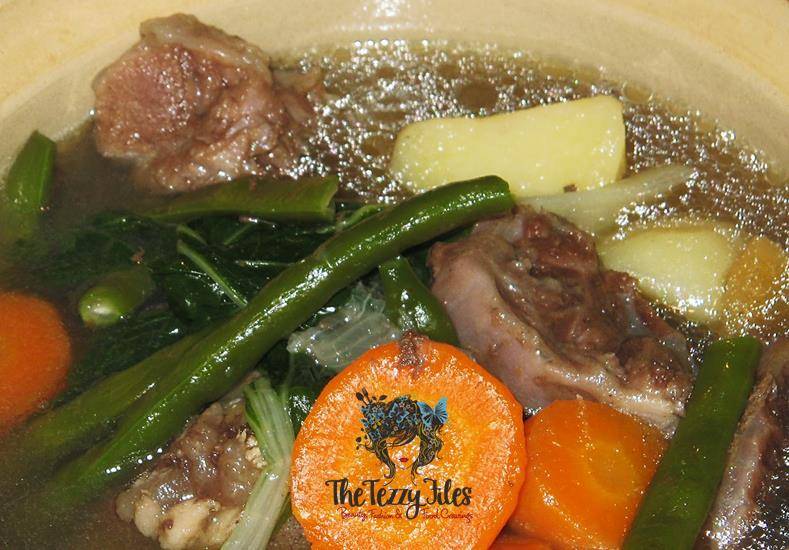 END_OF_DOCUMENT_TOKEN_TO_BE_REPLACED

Suhoor is the early morning meal Muslims the world over wake up to before the crack of dawn. It is a very early breakfast before bowing down to prayers and asking the Almighty for acceptance of the fast.

We have been enjoying far too many extravagant Iftars this Ramadan, and I am taking the Suhoor meal to nourish from within. To fulfill my ‘5 a day’, a smoothie is a sure-fire way to quickly consume a number of fruits in one sitting.

Last night I came up with a delicious concoction, and wanted to share the recipe with you least I forget it!

END_OF_DOCUMENT_TOKEN_TO_BE_REPLACED

Remember my gastronomic meal at Zafran? We had a sampler dish from every corner of India!

Meet Chef Gaurav, the mastermind behind the delicious fare.

With an impressive culinary career including cooking for the Ambani’s, Chef Gaurav gets candid about his journey as a chef so far and has generously shared the recipe for one of my favorite dishes at Zafran: the Bengali inspired Prawn Coconut Curry. This mildly spiced curry is a perfect addition to the Iftar table.