A visit to The Oberoi always manages to transport me back to nostalgic holidays in India. Seeped in Indian hospitality and tradition, the turbaned concierge awaiting guests onto the red carpeted entrance can easily fool the mind into believing we are in India. The dominating Burj Khalifa in the backdrop brings me back to the present; this is The Oberoi set in the dazzle of Dubai. 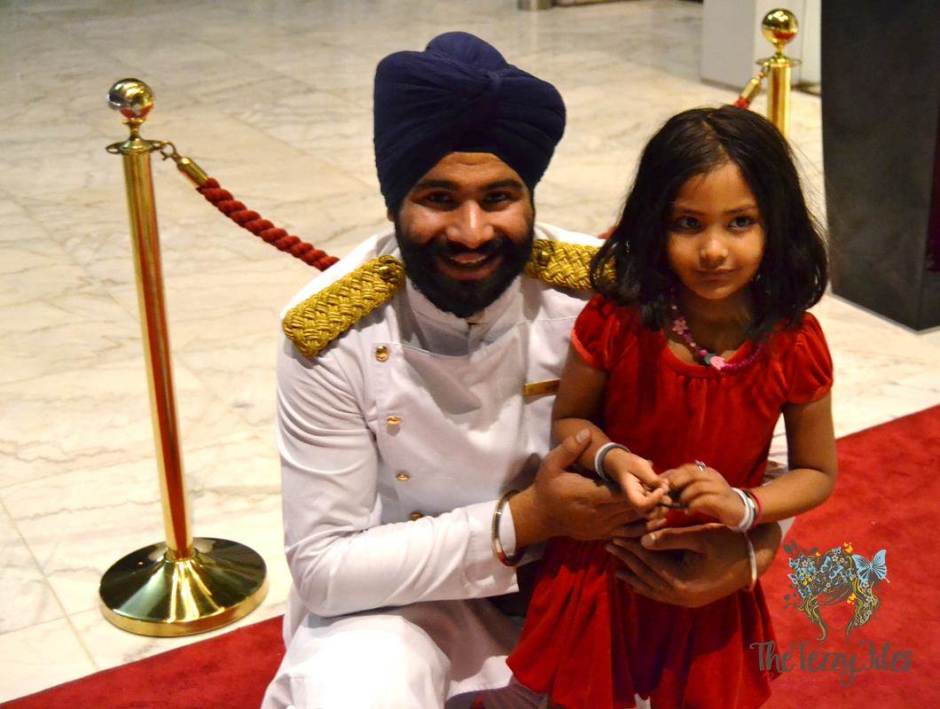 Given the opulence of The Oberoi, it is pretty much apt that the BBC Good Food award for Best Indian Restaurant (under the ‘fine dining’ category) went to the hotel’s Indian restaurant, Ananta, this year. 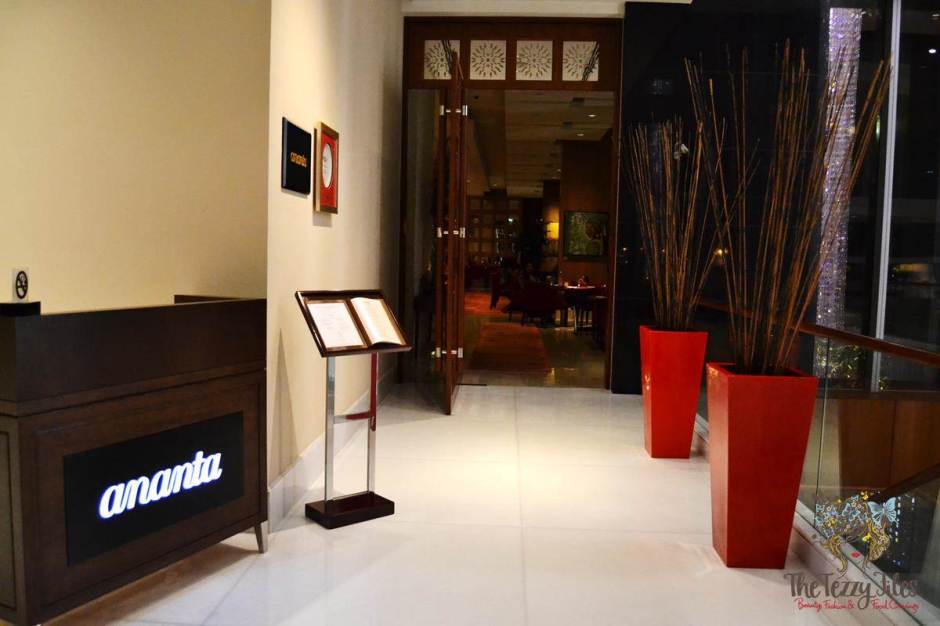 My family and I had the pleasure of enjoying a fusion-style three-course dinner at Ananta last Friday.

The interiors ring out a muted sophistication with deep maroon upholstery, dark warm wood and mellow yellow lighting that is offset with the brightness of the open-view tandoor kitchen. 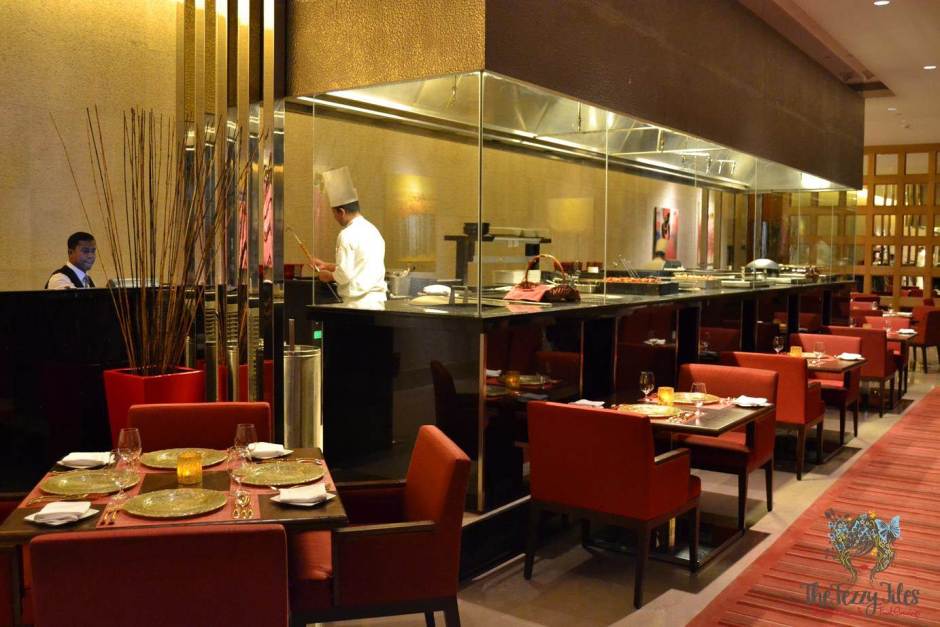 The golden cutlery adds to the richness of the ambiance; and fusion Indian music, a cusp of ragas and trance, gets us into the groove for Indian fine-dining.

We sat by a window that looked into the hotel courtyard. The modern, urban lines of solid steel architecture that make up The Oberoi are juxtaposed with a small patch of trees that look surprisingly serene in this setting. 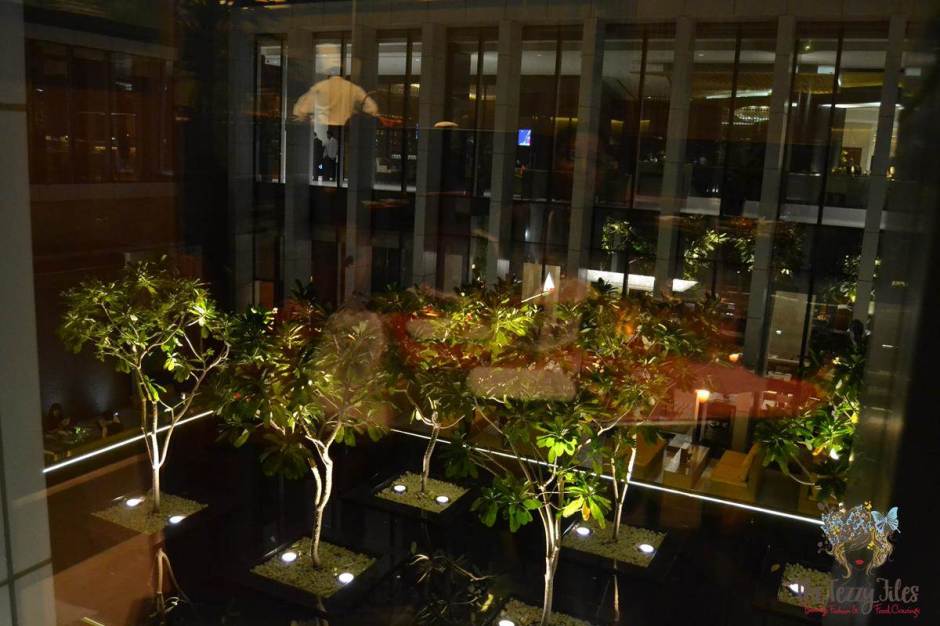 Saneesh K. Varghese is the Head Chef at Ananta, and is also the man behind the creation of many of the flavorful dishes the award-winning restaurant has on offer. Chef Saneesh hails from the Southern Indian state of Kerala, and comes from a lineage of spice traders who have a profound love for cooking.

Chef Saneesh has had a passion for cooking for as long as he can remember. He created his very first dish at the tender age of 8, and by the time he hit 18, his culinary career was on fast-track.

Chef Saneesh has been with The Oberoi group for over 12 years, and was an integral part of the team behind the conceptualization and opening of ‘Ananta’. The restaurant has now been in operation for 2 years, and Saneesh is ecstatic on how far it has come since its beginnings, having bagged a number of prestigious awards including this year’s BBC Good Food’s ‘Best Indian Restaurant’ under ‘Fine Dining’.

Despite being a South Indian, Chef Saneesh trained as a professional North Indian chef, and joined The Oberoi under this capability. However, his love for coastal South Indian dishes has seen a number of classics from this region making entrances on the Ananta menu.

We have dined at Ananta before, and tried their thaali (an Indian platter consisting of a number of set dishes that are endlessly refilled as per appetite). This time round, we decided to go a la carte.

To start off our meal, we were served a ‘Dahi Kachori’ as an amuse-bouche. 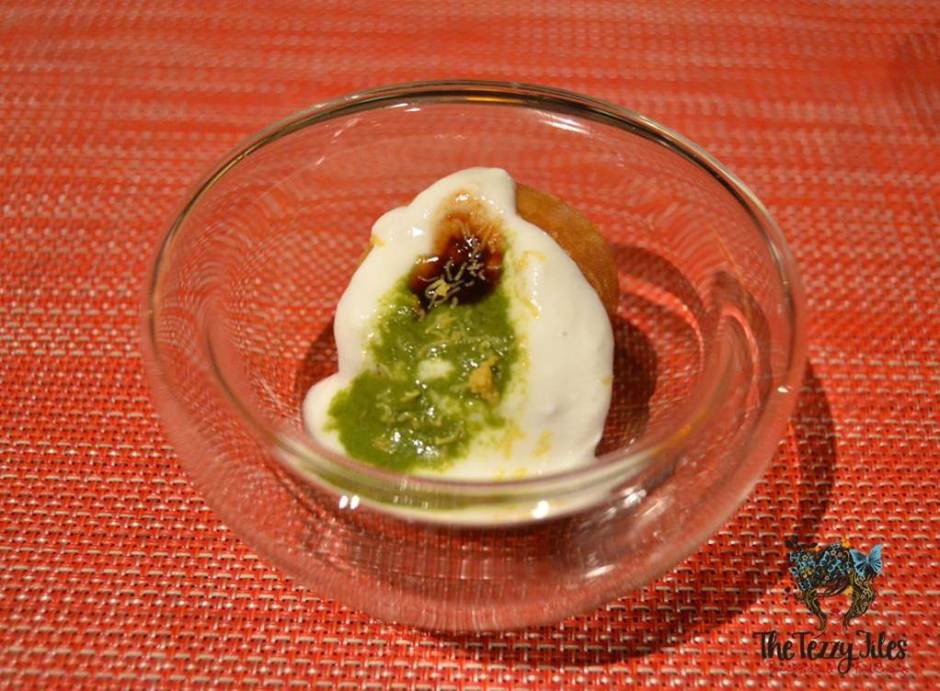 The dahi kachori is essentially a deep-fried savory Indian pastry that has been stuffed with a spiced lentil filling, and served with a mouth-watering topping of creamy whipped yogurt, tangy tamarind and a spicy fresh coriander chutney. The burst of spicy, tangy, sweet whet our appetites, and we keenly awaited our next serving.

In the meantime, we were replenished with drinks.

How pretty is the glass beaker? My daughter looks on in fascination as she is served her very fresh glass of watermelon juice.

Here is a line-up of our drinks: 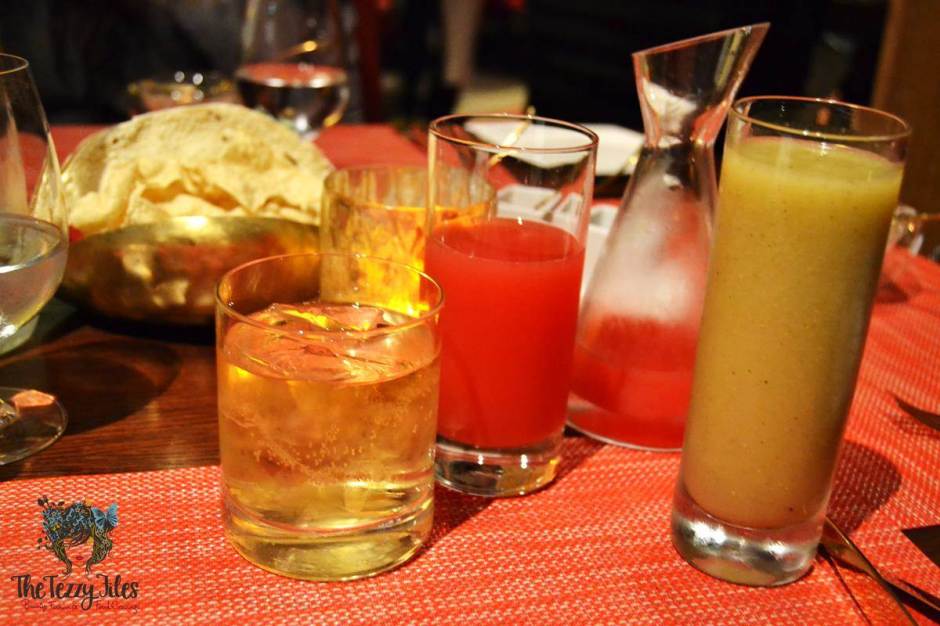 Hubby had whiskey on the rocks, bubby had fresh watermelon juice, and the third in line is my  Aam Panna. In the foreground is a bowl of complimentary pappadoms that were accompanied with a small tray of assorted chutneys.

My drink is far from photogenic, yet it is packed with flavor. Aam Panna is a traditional tangy North Indian green mango drink spiced with cumin and black salt. Ananta’s version is of a thicker consistency than what I have had before; it is almost a milkshake without the dairy, and I really enjoyed the play of tangy-sweetness at every sip.

Our appetizer platter looked like something out of the Master Chef series. Every element on the plate has been carefully stipulated and presented with great detail and care.

Hara bhara kebab is a traditional North Indian vegetarian patty, and it gets its gorgeous green color owing to the addition of spinach. Ananta’s hara bhara kebab was coated with roasted sesame seeds, and the nuttiness of the coating went beautifully well with the spinach-ricotta mix.

The Kerala spiced tandoori salmon (seen right behind the hara bhara kebab) is Chef Saneesh’s take on South Indian classical flavors. Regional Indian fish has been swapped with a premium fillet of salmon that has been marinated in spicy South Indian flavors and baked to perfection.

The lamb seekh kebab is the long, cigar-shaped kebab on the platter. It is made of finely minced mutton that has been spiced with the pungency of dried red chilies. Ananta’s lamb seekh kebab had a beautifully silky smooth texture, and the playful heat of chili did not overshadow the mix of other aromatic spices that have been thrown in.

The murgh malai tikka is a flavorful piece of boneless chicken that has a melt-in-the-mouth consistency. It is a popular addition on North Indian non-veg platters.

The Rajasthani laal boti This kebab hails from the North Westerns Indian state of Rajasthan, and is essentially a piece of skewered lamb that has been oven-roasted in the traditional Indian tandoor. The meat was very tender, and beautifully spiced.

The tandoori tiger prawn was succulent, juicy and bursting with traditional tandoor flavors. The prawn has been char-grilled, and has a slightly smokey flavor that goes beautifully with seafood. 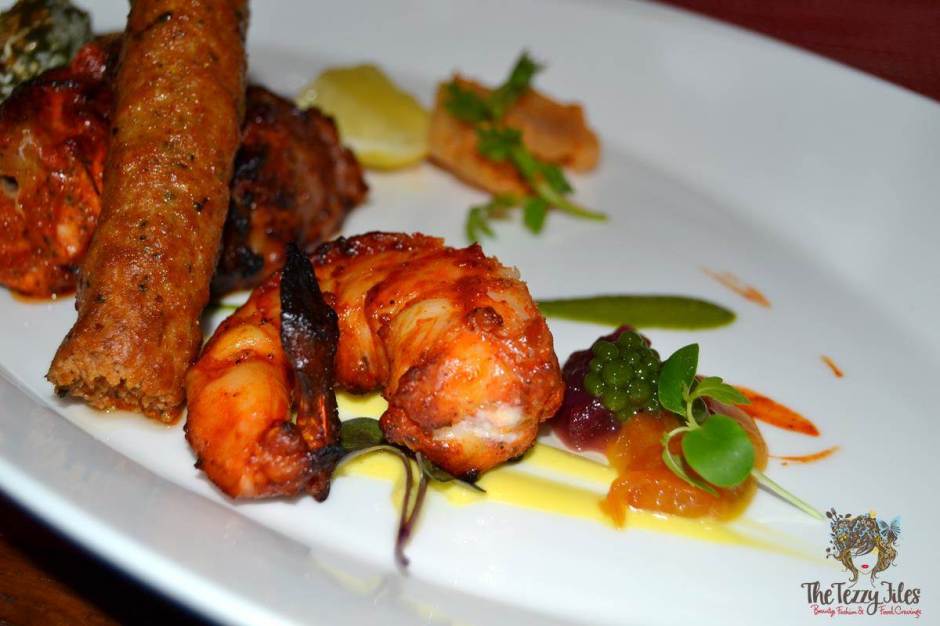 The accompaniments on the appetizer platter were as complex as the fabulous six.

Notice the colorful puddle next to the tiger prawn? The green beads are Curry leaf Caviar and it is sitting on pools of Kumquat marmalade and Apple Pomegranate Jam.

The streaks of pale yellow under the prawn is a special Saffron Yogurt blend, and the green in the background is a spicy Chilly Coriander Chutney.

The platter also included a smear of a traditional Mint Garlic Chutney, and the condiment I was most impressed with was the Black Garlic and Truffle Chutney (see the deep brown smear below):

Truffle in a chutney? How innovative is that! Chef Saneesh plays with local produce and accentuates them with classic Indian flavors.

However, he has a deep-rooted respect for traditions and tries to play it as safe as possible when creating fusion dishes.

Chef Saneesh’s love for traditional, healthful dishes is reflected in the preferences of his elite celebrity clientele. Celebrities Chef Saneesh has had the pleasure of serving include cricket legends, Sachin Tendulkar and Anil Kumble. From the Bollywood fraternity, Chef Saneesh has served up his magic numerous times to Akshay Kumar and King Khan himself (Shahrukh Khan).

Our mains were loaded with the love of Indian heritage cooking.

Kashmiri nalli gosht is lamb shanks cooked in a spicy yogurt-based gravy, and is a delicacy from Kashmir, the Northern-most part of India.The lamb was tender, and the gravy flavors played on delicate notes of cardamom and cloves.

The Malabar chicken roast took us to the Southern part of India, and Chef Saneesh got a chance to give our taste-buds a spicy hit from his roots. The chicken was unbelievably moist and soft, and the spicy ginger-laced gravy had a full-bodied South Indian taste that differentiated it from its Northern counterparts.

The Badam aur tulsi ke koftey is the little yellow dome at the center of the plate. The kofta is made of Indian cottage cheese, and the gravy has been decadently thickened with cream and ground almonds.

Ananta’s Saffron Pulao has a delicate saffron flavor, and a decadent aroma of ghee (Indian clarified butter). It acts as the perfect base for most curries.

A Cucumber Raita was served on the side. This is essentially a yogurt-based cucumber salad, and the cool, creamy yogurt helps counteract overly hot curries.

Of all the dishes served, Ananta’s Dal Makhani was my favorite. This slow-cooked black-lentil broth, loaded with buttery goodness, had me raving from the first spoonful. 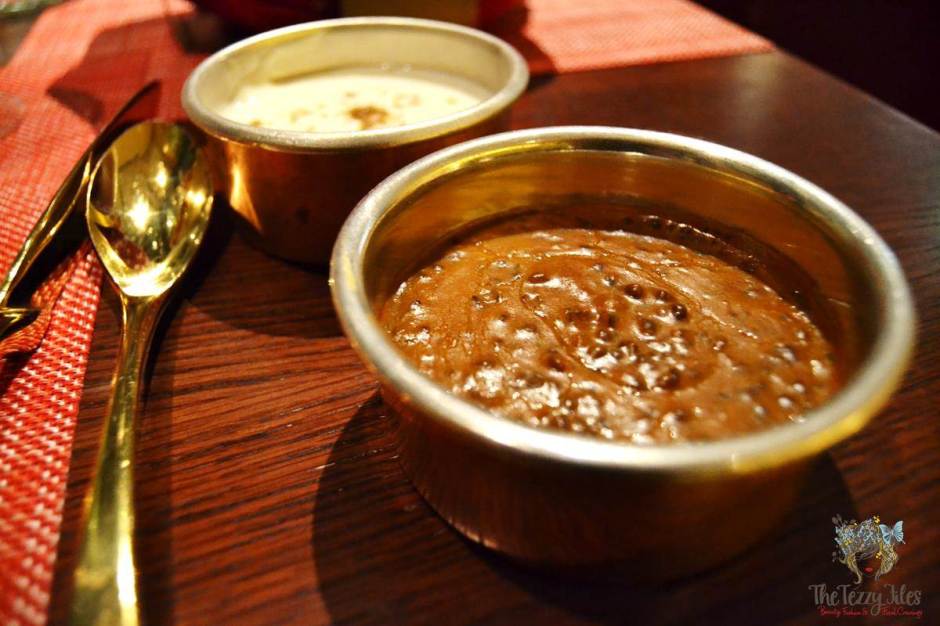 Our bread basket consisted on Garlic Naan and Pistachio Sesame Naan. ‘Naan’ is a traditional Indian flat-bread containing yeast. We’ve had the garlic version before, but the later with ground pistachios and sesame must be a result of Chef Saneesh taking inspiration from Arabic delicacies.

Taking traditional combinations to new heights, Chef Saneesh played on the classic combination of gulab jamun and ice-cream, and his Fried Malai Kulfi creation is currently a best-seller on the Ananta menu.

A scoop of malai kulfi (a decadently rich Indian ice-cream) has been deep-fried in a crunchy batter and served on top of a layer of deconstructed gulab jamun. An aesthetically pleasing vanilla foam laces the top of the ice-cream dome, and mildly tangy streaks of grape and passion-fruit coulis smear the plate to counteract the sweetness.

Chef Saneesh’s Fried Malai Kulfi  is a rich, satisfying treat and showcases his artistic talent at fusion cuisine without moving too far away from traditional flavor combinations.

We ended the gastronomic meal with hot cups of Masala Chai and South Indian Filter Coffee. The warmth of caffeine was much needed to digest all this overeating!

‘Ananta’ translates to ‘infinite’ or ‘endless’ in Sanskrit, the ancient Indian script. With a menu loaded with traditional delicacies and new Chef fusions being added every so often, Ananta at The Oberoi Dubai offers an endless fusion of Indian culinary traditions sure to please the pickiest of eaters.

Combine fine food with the refined setting of fine dining at one of India’s most respected five-star hotel chains, and Ananta is the perfect choice for that very special dinner out.