Chili’s, the iconic Tex-Mex casual dining chain, needs no introduction. The brand has a global fan following with over 1,500 chains in 33 countries, and has been listed as a UAE ‘Superbrand’ for 8 years running.

Chili’s recent ‘Chef Cuts’ campaign has splashed across outdoor media around the UAE. I first spotted their enticing advertising on a lamppost whilst stuck in traffic, and made a mental note to visit them soon.

We finally made it to Chili’s last Tuesday, a band of four steak-hungry friends, a perfect number given they have four versions of the Chef Cuts!

Saleh Bin Lahej Group own the Chili’s franchise across the UAE and Oman. Recognizing the ever-changing needs of the region’s foodies, the group has invested a great deal of time and money into redesigning Chili’s. The revamped stores now have a ‘kitchen of the future’ concept with state of the art equipment designed to deliver faster, more efficient service.

The Saleh Bin Lahej Group have come to the realization that diners of this region have become far more food-savvy and expect topnotch quality for their money. The ‘kitchen of the future’ has enabled the UAE and Oman branches to expand on their menu options, and for a limited time only (till 8th June to be precise!), customers get to savor on the finest chef cuts for as low as AED 129 a plate.

The four Chef Cuts are essentially flavor variations of the same high-quality steak, and each option is served with a side. Even the sides are new additions!

Chili’s Chef Cuts uses prime short rib beef fillet. Being a regular Chili’s diner, I have to mention that I found the quality of these cuts to be far superior to any other steak I have had previously in this chain.

This juicy slab of meat is served on a bed of corn salsa. Owing to their Tex-Mex heritage, Chili’s never fails to impress with their salsa. The vegetables used were delightfully fresh, and complimented the full-on meaty flavors of the steak beautifully.

The Southwest Short Rib Fillet is topped with a generous serving of pickled red onion. The onions have a delicate vinegar sourness which overshadows their original pungency, yet manages to keep each thinly cut slice crisply fresh.

The fillet is garnished with a sprinkle of queso fresco (a light Mexican cheese), and fresh cilantro.

The Southwest Short Rib Fillet is served with a brand new side: Skillet Mashed Potatoes. This mash has a more earthy potato flavor when compared to the regular airy white Chili’s mash. The mash is creamy smooth with a pale golden coloring, and spoonfuls of this along with the steak make for a heartier meal. 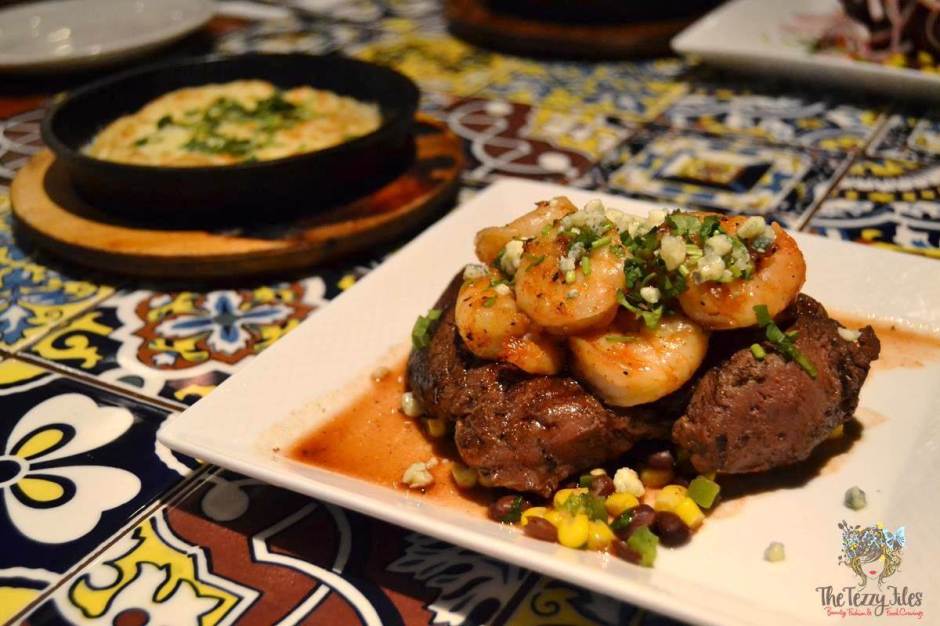 Like the Southwest, Chili’s Glazed Shrimp Fillet sits on a bed of corn salsa and has been garnished with queso fresco (a light Mexican cheese), and fresh cilantro. However, the pickled onions have been replaced with juicy, plump shrimp.

These shrimps take on a gorgeous golden hue owing to the butter glazing. The succulent meat, the decadent shrimps, the sprinkle of cheese and the freshness of the salsa; Chili’s Glazed Shrimp Fillet is a buffet of flavors in one forkful.

Chili’s Glazed Shrimp Fillet is served with Skillet Macaroni & Cheese, yet another new addition to the menu. Mac & cheese has been one of my favorite comfort foods since childhood, and the version at Chili’s was lovingly loaded with cheddar flavor. This side can easily be had as a main dish on its own. 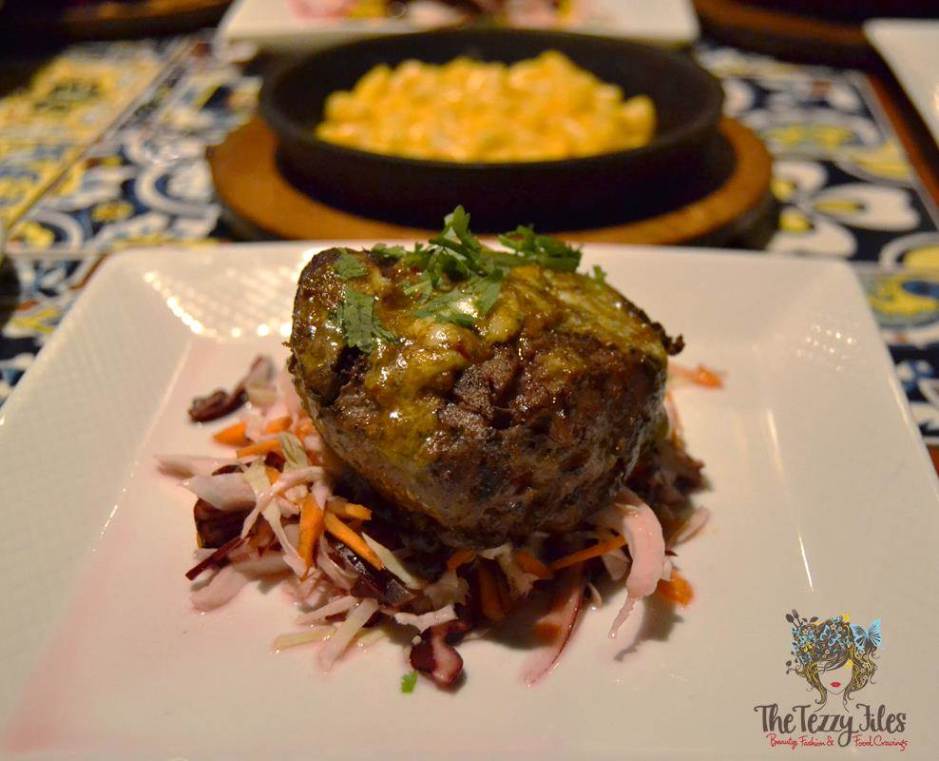 The same succulent slab is now served on a bed of fresh coleslaw, and the flavors of Chili’s Spicy Crab Fillet is dominated by an unconventional crab-meat mash. The crab-meat has been very finely mashed, and accentuated with the heat of chili. A generous downpour of melting Monterey Jack Cheese acts as the topping, and is finished off with sprinkles of queso fresco (a light Mexican cheese), and fresh cilantro.

This fillet is also served with the Skillet Macaroni & Cheese.

The Chipotle Blue Cheese Fillet is also served on a bed of coleslaw, and has been very generously smothered in a special chipotle bleu cheese sauce. A few sprigs of cilantro have been thrown in as garnish.

For the side dish, this fillet is served with Skillet Smoked Red Potatoes, yet another newbie on the Chili’s menu. This is essentially a yummier version of regular french fries. The fries are a beautiful pumpkin-orange, and loaded with the flavorful sweetness of red potatoes.

We ordered our Chef Cuts medium-rare, and were very impressed with how beautifully and evenly cooked each of the four servings were. Here is a peek of how perfectly pink our cuts were:

Which of the four Chef Cuts did we like best you ask? Judging by the steak itself, there was hardly any difference. The variations lie in the garnishes, so it really is a personal choice.

I for one liked the Chipotle Blue Cheese Fillet best. This probably stems from my love of blue cheese. The rest of the table declared the Glazed Shrimp Fillet to be the winning dish. A pile of juicy, plump shrimps for the same price after all!

After this hearty dinner, the tagline for Chili’s Chef Cuts made total sense: ‘Flavors that stack up’. Each fillet is stacked with individually crafty Tex-Mex flavors, and at AED 129 a plate, it definitely is a bargain. These decadent cuts are limited edition, and will only be available till 8th June. With under a month to go, I must plan a trip back soon!