The word ‘cafe‘ is getting a major face-lift in the Dubai foodie scene. From what one would presume to be a simplistic setting for catching up over cups of coffee and a pretty pastry, you have the likes of Indian import Farzi Cafe offering a lineup of much talked about molecular gastronomy treats, and then I had the pleasure of dining at Grand Cafe Boulevard, a Lebanese fine-dining cafe that treats its guests like royalty. 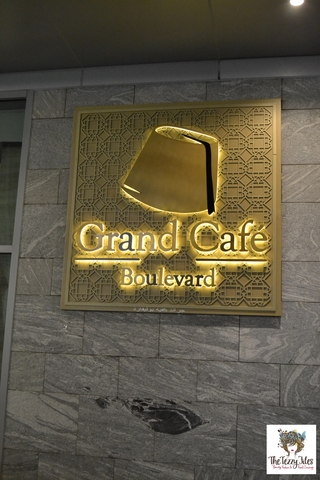 Where else in the world do they roll out a red carpet for guests entering a cafe? This was the VIP welcome we received at Grand Cafe Boulevard! The cafe is located diagonally opposite The Address Downtown Dubai, and you need to drive up the Dubai Mall Fashion Parking ramp to get to the valet service offered right outside the red carpet. 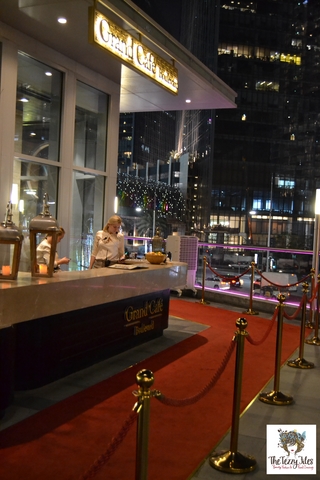 Grand Cafe Boulevard is a two-storied restaurant, the top floor has an open patio with close-up views of the Burj Khalifa, and by evening the tables are filled with shisha-puffing regulars breathing in the last of the beautifully breezy weather.

As we were dining with our little tot, we were ushered down the elevator to the non-smoking area. The interiors are absolutely majestic and look like something out of the pages of an Arabian Nights palace. With ornate wall decor and Arabesque art taking up all corners of the walls, the ambiance is made complete with a mosaic waterfall and the upbeat tunes of a live band. And yes, they call this a ‘cafe’!

Despite the synonym ‘grand’ being added to the name of this place, I was not expecting such opulence, such grandeur! We were there last Wednesday night, at the start of the long weekend, and the hostess at the front was kept very busy ushering in an endless stream of well-dressed diners. The well heeled ladies in their cleavage enhancing evening gowns and designer hairdos made me feel uncomfortably under-dressed in my denim maxi dress. The dress code here is ‘smart casual’, but you might want to reiterate on the ‘smart’ quotient. This is, after all, a Lebanese joint, Lebanon being the most fashion forward of the Levant region!

Our table was hosted by the ever-smiling John. Despite being an expat from the Philippines, John knows Levantine cuisine like the back of his hand and I felt absolutely comfortable leaving our menu choices in his expert hands.

I wanted to try authentically Lebanese dishes that were a little different from the usual round of Arabic food (think hummus, moutabbal and a round of grills), and Paul had a whole list of recommendations up his sleeves. Here is what we started off with:

Muhammara Rolls: Muhammara is a mildly spiced walnut dip, popular in the Levantine. I have had it a number of times, spread on puffed khubz (Arabic pita bread), but at Grand Cafe Boulevard it is served rolled up in aubergine slices, and drizzled with tahini (sesame paste) and tangy pomegranate molasses. I absolutely loved this nutty, tangy burst of flavors. 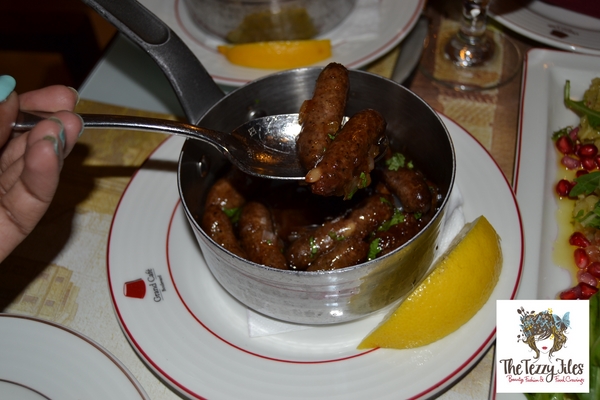 Hendbeh: We were fortunate enough to try this seasonal dish. Hendbeh is a traditional Lebanese dish featuring dandelion sauteed with onion, garlic and chili. It is topped with crisp, deep-fried onion, pomegranate and a squeeze of fresh lemon. It tastes quite similar to sweltered spinach, minus the characteristic boldness. You could have it with the fresh, puffed up khubz bread served on the side but I was rather happy spooning it up on its own. Absolutely delicious! If you want to try this dish, dash to Grand Cafe Boulevard ASAP as the dandelion will soon be out of season.

Chicken Wings Provencal: These deep-fried battered chicken lollipops (yes, the little drumstick pieces that come attached to the wings – not the wings themselves), have been given a tangy Levantine twist. After being deep-fried to crispness, the chicken is marinated in a lemon, coriander and garlic mix. The chicken remains somewhat crisp, but now has a strong, addictive hit of lemon that makes you reach out for more. 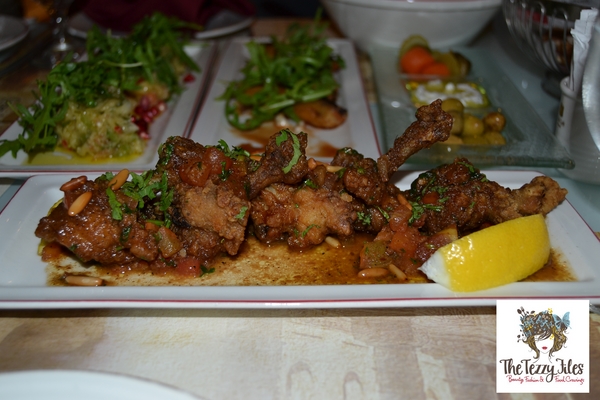 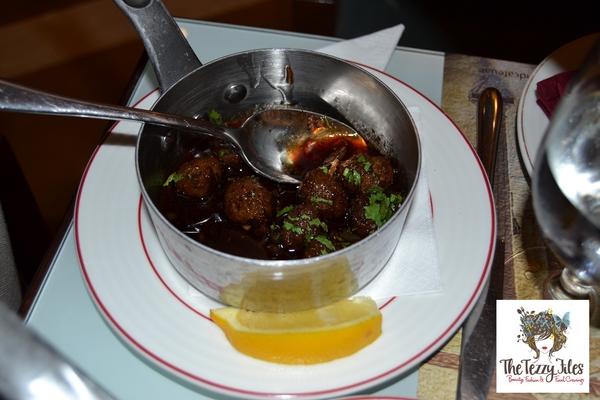 Raheb Salad: Legend has it that this very popular grilled aubergine salad is named after a monk who resided in the mountains of Lebanon, and lived off the meager crop that grew in his backyard. The salad features the mashed up flesh of grilled aubergine, mixed with finely diced onion, tomato and (you guessed it!) tangy pomegranate molasses. This very light, healthful salad is the ideal choice for the upcoming summer heat that will soon be heaving down upon us. I plan to try making this myself for iftar this Ramadan.

Boiled New Potatoes Salad: An Arabesque take on the ever-popular Russian boiled potatoes and egg salad, Grand Cafe Boulevard manages to make it Mediterranean by mixing in finely chopped Arabic parsley, and replaces the heavy use of mayo with a light, refreshing lemon dressing. 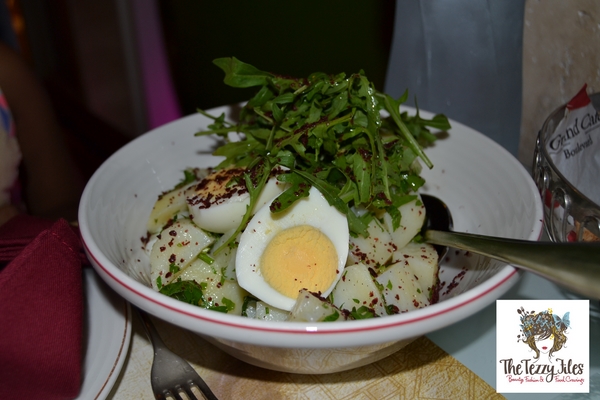 For drinks, Grand Cafe Boulevard has a list of very enticing mocktails. Hubby tried their Red Roses, a beautiful blushed muddle of cranberry, coconut, orange, passion fruit, peach and grenadine. Mine’s the Electric Blue; a refreshing mix of pineapple, lemon and orange that tastes very much like a virgin Pina Colada minus the heaviness of coconut cream. It gets its Smurf-like vivid blueness thanks to the addition of Blue Curassow. 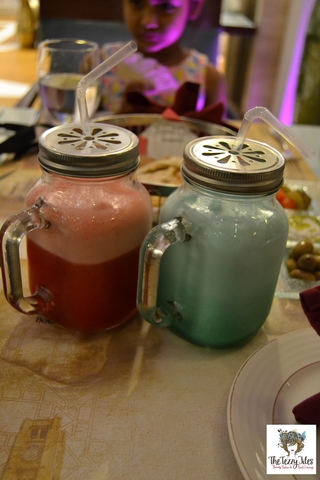 With so many delicious appetizers down, we were already pretty stuffed. Yet, given how much we were enjoying John’s recommendations, I was also looking forward to our main-course. For our mains, I ordered Grand Cafe Boulevard’s Grilled Baby Chicken, and Hubby went for their Kebab Khashkhash. 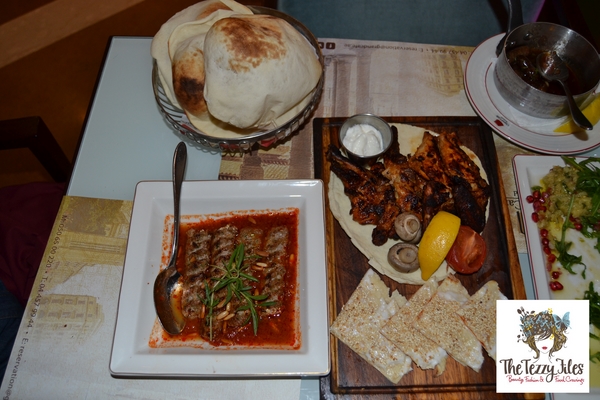 My chicken dish might be called ‘Baby Chicken’, but the portion size is massive! It can easily be shared between two hungry adults. Grand Cafe Boulevard’s Grilled Baby Chicken has been cooked the traditional way, on burning charcoal, resulting in a deliciously smoked flavor and charred exterior. The chicken itself has been cooked beautifully, and I loved dipping each forkful into the garlic aioli served on the side.

The khubz bread served on the side of my chicken dish deserves a special mention. I have never had anything quite like it! The khubz quarters have been filled with a not so spicy Arabic chili paste, and topped with the garlic aoili paste. A generous coating of sesame seeds coats the top, and it has been toasted to a light crispness. These pieces of khubz are probably heavier on the calorie scale than the chicken itself, but are an absolute delight to eat, even on their own.

Grand Cafe’s Kebab Khashkhash is essentially a platter of very moreish spiced beef kebabs served in a dense gravy of tomatoes and onion. A real comfort food for beef lovers, this dish is a must try on a cold winter’s day, and is very enjoyable with the puffed hot khubz bread that was served on the side. 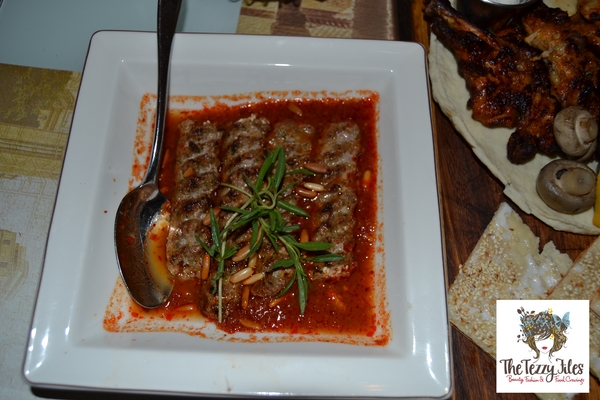 For our desserts round, we tried Grand Cafe Boulevard’s Dates Osmalieh and Oriental Ice-cream.

Osmalieh is a popular Arabic sweet treat made of vermicelli, and filled with cream. At Grand Cafe Boulevard, they have not only added dates to the mix, but given this traditional treat a quirky new-age look and feel by serving it as a layered dessert, complete in a mason jar.

Grand Cafe Boulevard’s Oriental Ice-cream might look like your regular scoop of vanilla, but it taste far more exotic. The ice-cream itself has a harder, icier texture, and the taste has a hint of some kind of floral essence I cannot put a name to. It is topped with an Arabic custard cream, and a very generous downpour of finely slivered pistachio.

With all this over-eating, a cup (or glass!) of Moroccan tea was a must. I absolutely loved the presentation of my tea tray at Grand Cafe Boulevard, complete with a silver teapot and a teapot holder that resembles a man of Levantine origins! 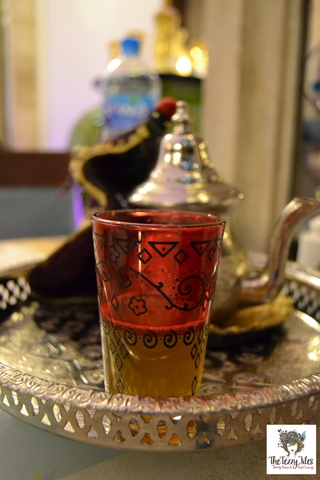 At Grand Cafe Boulevard, you really do get treated like royalty. Starting off with a red carpet welcome, the service at this ‘cafe’ was absolutely immaculate. We had our plates changed even between courses, and when we were waiting for the valet to bring back our ride, we were offered comfortable outdoor seating, complete with an offering of exotic fruit! A cafe with fine-dining service, and a deliciously authentic lineup of Lebanese dishes to boot; Grand Cafe Boulevard has to take the blame for raising my expectations of cafe-style dining!

Grand Cafe Boulevard has a very special breakfast offer for as low as AED 98 for a family of four! I plan to try this out soon.

Grand Cafe Boulevard is located on the outskirts of Dubai Mall (right infront of The Address hotel). Given the popularity of the place, table reservations are highly recommended. Call 04 4535262 for details.