Hello darlings! Did you miss me? Sorry for the extended silence, I’ve been away on an exciting 3 day tour around Amsterdam. This Eid holiday was totally unexpected, and I have to say its been the best surprise I’ve ever received because I actually won this trip on radio!

The last time I won on radio, I was ecstatic about the cookbook I was gifted. That was on Dubai 92. For a girl with the common complaint on never winning anything, I got the biggest surprise ever when the Hinglish radio channel Suno 1024 gave me a call last week; I won a trip to Amsterdam, Netherlands! Whoa! Still pinching myself. Can’t believe this actually happened. Too good to be true, what a fabulous Eid surprise!

In collaboration with AFC Holidays Dubai, Suno 1024 was giving away a 3 nights, 4 days Eid holiday to listeners. All you had to have to qualify was the visa documents.

I was a little skeptical on going initially as I didn’t know any of the other winners. Suno 1024 organised for a briefing session prior to take-off last Friday, and this helped break the ice and I’ve made a bunch of incredible friends who made the journey even more magical.

We were a chirpy, click-happy foursome. In the short time we spent together, its pretty amazing to think that just a few days prior to takeoff, we didn’t even know of each other’s existence!

Heena is from a Finance background, Amarpreet is a PR pro, and Neha is an ex-flight attendant.

I want to thank my lovely new friends for their wonderful company, and even more so for all the gorgeous clicks we have shared. This post is a mix of clicks taken from all four of our cameras (and phones!).

After spending Eid day with the family, we departed from Dubai at midnight on KLM, the national airline of the Netherlands.

The flight was fully packed. This was my very first experience on KLM. Perhaps we got an older aircraft as the seats in Economy were very basic, almost fragile given the turbulence we experienced midway into the flight. Also, given it was a late night flight, I was a little disturbed that the lights were not turned off till about 3 hours into the flight. The excitement of this unexpected holiday was also another factor that was keeping me awake!

My initial qualms with KLM were satiated after the breakfast meal was served. This was our first taste of fresh Dutch produce. I fell in love with their dairy products, and the berry yogurt was my favorite. Super fresh and creamy, it tasted more like a naughty dessert!

Once we landed in Schipol International Airport – Amsterdam, the Suno 1024 group was escorted into a bus that took us to our hotel.

We stayed at NH Jan Tabak Hotel in Bussum, an upscale residential area on the outskirts of Amsterdam.

The hotel itself is clean, comfortable and basic. It is a 4-star property, and the stay included a daily breakfast buffet.

The breakfast buffet is nothing fancy, and caters to commonly eaten
combinations including boiled eggs and toast, cold cuts, three different types of muesli, yogurts, fruit juices and coffee and tea. My favorite item from this buffet was their croissants. I’m not a croissant kind of girl, but the ones here are sinfully buttery with a flaky golden exterior, and a soft, stretchy inside. These tasted divine with jam.

AFC Holidays organised a tour for us on Day 1. The troupe left the hotel at promptly 10 am, and we were given a tiki tour of Amsterdam city. A local tour guide pointed out significant buildings and their respective historical significance.

I was in awe with the architecture of Amsterdam. With buildings dating back to as far as 1306, the city is soaked in the beauty of the past. 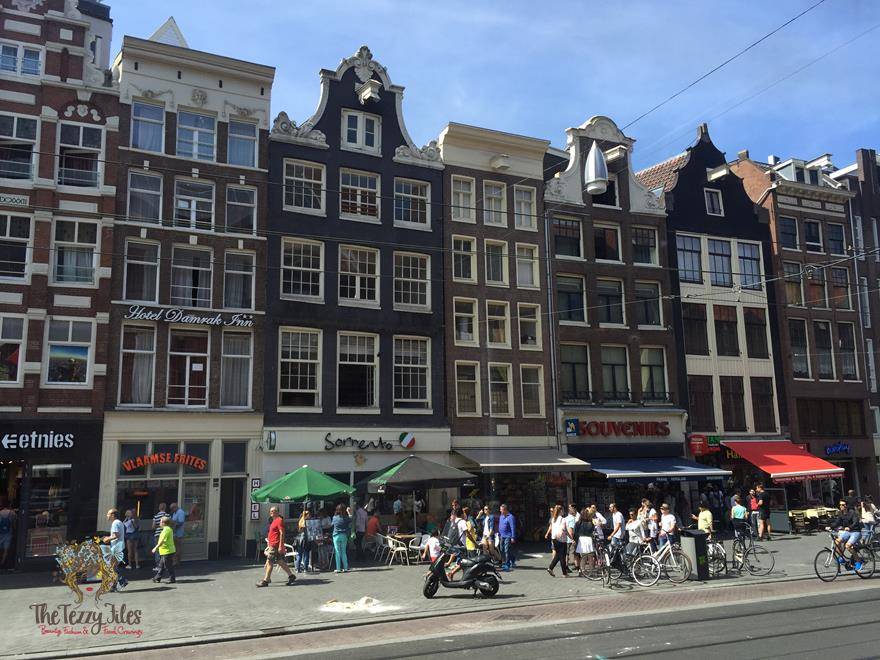 Unlike many other European regions surrounding Amsterdam, this city did not suffer from any of the bombings during the Second World War. The heritage buildings have therefore been laboriously preserved in all their past glory giving the medieval city a picturesque charm akin to fictional fairy-tales.

We made a pit-shop at the Amsterdam Flower Market. This is a picturesque area featuring local stalls selling everything from flowers to souvenirs and delicious locally grown fruits. 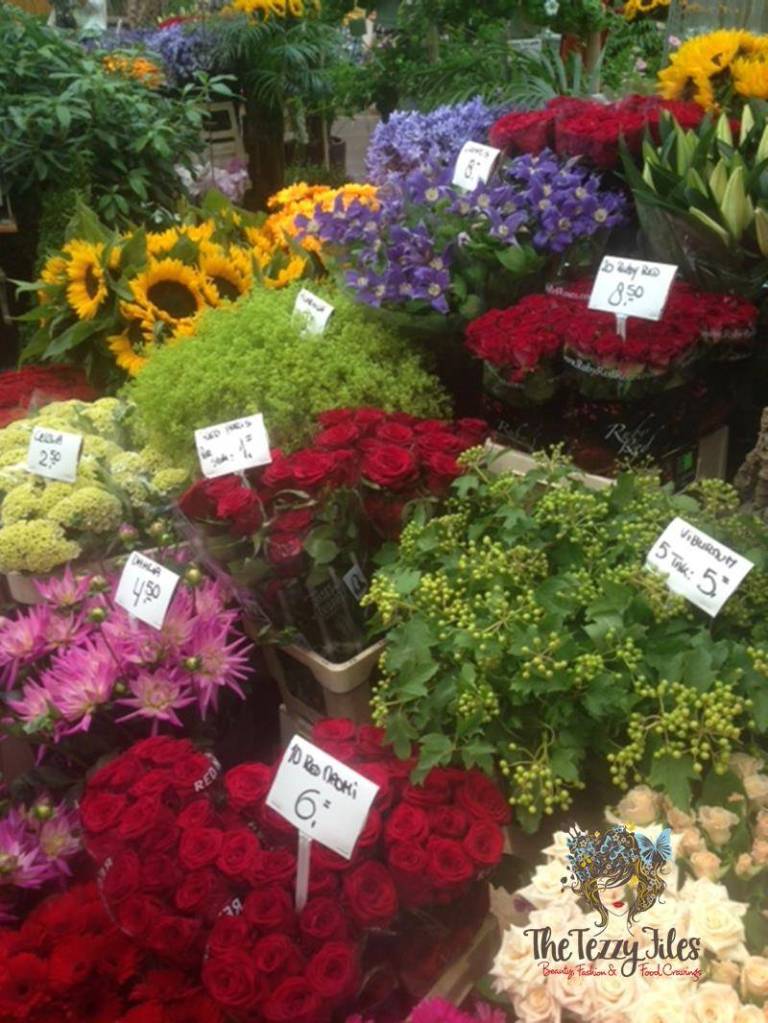 The name ‘Amsterdam’ is a tribute to the city’s origins. The city grew around a dam in the river Amstel, and boasts of a total of 165 canals with a combined length of 60 miles.

Our tour included an hour-long tour of the canals. This was a leisurely cruise on scenic waters with views of the stunning historic buildings that line the streets of Amsterdam.

After the long scenic canal tour, we were absolutely famished. The last meal we had eaten was the early breakfast at the hotel, and now it was almost 3 pm.

We found a quaint looking cafe called ‘Crepe Bar’, and decided to try it out.

The cafe itself is small and narrow, and features rustic wooden furnishings. The walls are lined with Nutella jars and we had the most delicious Nutella-filled crepes here along with frothy cups of cappuccino.

Dam Square falls at the heart of Amsterdam city, and features the National Monument dedicated to those who lost their lives during the Second World War.

The Royal Palace is right next to Dam Square, thereby giving this area a national significance. A beautiful medieval church resides by the palace, and this has been used by royalty for centuries.

Being the best known square in the city, Dam Square is the easiest landmark for meeting up. I was super excited to catch up with my old school friend Anne Christien, a Dutch resident of Amsterdam. Anne and I have been close mates for the longest time, and hadn’t met in nearly two decades. Yet we hit off right where we left off, and her bubbly personality is as infectious as ever! 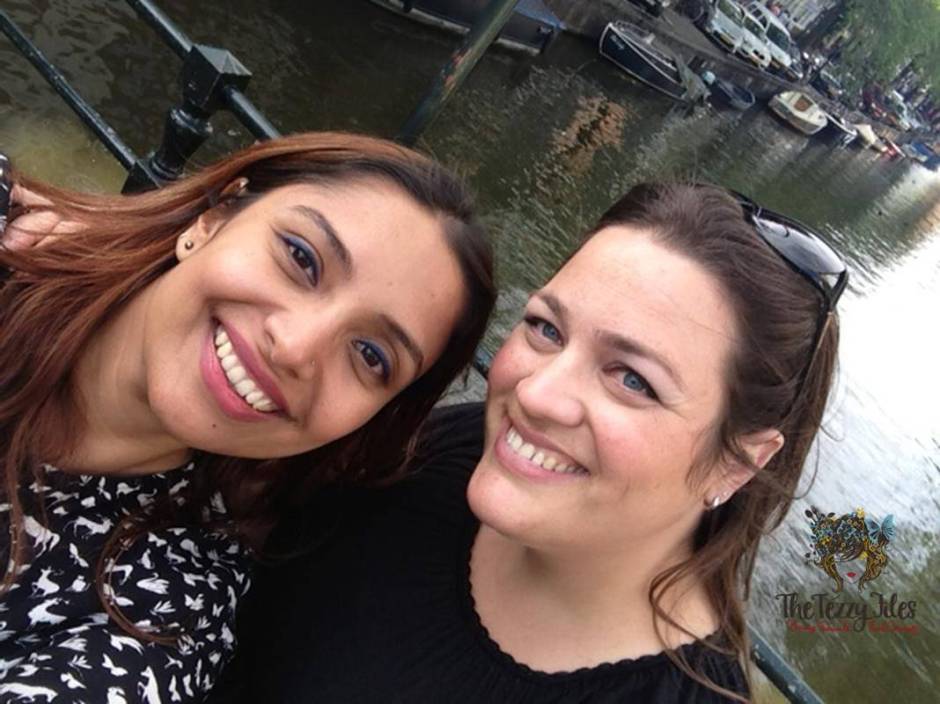 How lucky am I to have a local Dutch friend? She took us around the shopping district, as well as a quick tour around Amsterdam’s Red Light District.

Funny how anything notorious is far more attention-grabbing. Amsterdam’s Red Light district is the perfect example as it is sprawling with tourists.

Scantily dressed ladies flaunt themselves in retail-style windows curtained with theatrical velvet maroon. We were warned not to click photos here. The women don’t like to be photographed, and have been known to throw tourist cameras into the dam!

The red light district has a number of ‘sex museums’ and naughty toy shops. We aptly avoided both, and also took heed not to enter the ‘coffee shops’ here, engulfed with fumes of marijuana.

Anne booked us in for dinner just on the outskirts of the red light district. This restaurant has an interesting past. See my Instagram feed below! The creamy mushroom pasta was simply delicious.

For dessert, we found a little cafe specializing in waffles. Nutella seems to be a big deal in Amsterdam, so we had to have our waffles drenched with this infamously good spread #omnomnom

The last train out to Bussum (where our hotel is) leaves Amsterdam at 11 pm. It was a frantic rush getting to the train station, and even more confusing getting the tickets. Everything is in Dutch! Thank goodness for Anne. She figured out a weekly pass wasn’t worth it for our 3 days there, and we had to buy tickets off the ticket machines.

The tickets from Amsterdam Central to Bussum Naarsden station costs €5.70 and the painful part is the machines don’t accept notes! Handy tip to anyone planning to travel around the Netherlands on train: carry loads of change!

A few steps into the station, and the interiors change into a clean, sleek and modern station complete with a supermarket an food stalls.

At the entrance of the station is a large, classic piano. It is free to use by the public, and we enjoyed the shenanigans of this youthful bunch crooning to Dutch tunes.

A train journey from Amsterdam Central to Bussum Naarsden takes a little over half an hour. We were told our hotel, NH Jan Tabak, was just ten minutes away and therefore decided to walk.

It was a pleasantly cool night (around 15 degrees). The Bussum neighborhood features rows of residential townhouses made in near-identical red bricks. Vintage lampposts line the streets, and are curtained by cascades of branches from ancient barks.

It was all pretty wonderful till we realized it was past midnight and we had been walking well over 15 minutes with no hotel in sight. Panicked with no pedestrian to ask for help with directions, we had to resort to turning on our roaming data and use Google Maps.

Turns out we were on the right direction after all, but the walking time was grossly exaggerated. It would perhaps take 10 minutes by car, but on foot NH Jan Tabak hotel is a good 30 minutes away from the train station.

We got to the hotel around 1 am. With tired tourist feet yet high on fresh night air, we hit the snooze button as soon as we got to our rooms. Day 2 was scheduled to start off with an early morning bus tour, and we needed our beauty sleep zzzzzzz….

Day 2 of #tezzyinamsterdam will be up soon!

Leave a Reply to A Whirlwind Tour of Amsterdam & Beyond: Day 2 #tezzyinamsterdam | The Tezzy Files Cancel reply