I am back in sunny Dubai after a whirlwind trip back home to New Zealand. Where did the past two weeks disappear?

I flew via Singapore to Auckland, New Zealand and on the return path, I had an 8 hour transit in Changi Airport, Singapore.

As I was travelling alone, the thought of dwindling away 8 hours in Singapore all by myself seemed all too daunting and I was looking up Google on airport rooms and transit lounges.

Changi Airport has a number of well-facilitated transit lounges where guests can relax, have a light meal, watch some tele, browse and even shower.

However, once I landed into Terminal 2, I headed straight to Duty Free and thought it would be futile to waste my short time in Singapore on snooze mode.

My Air New Zealand flight from Auckland to Singapore took just over 10 hours, and it was nice to be able to finally walk about.

I was in Terminal 3, and when I saw the ‘Singapore Food Street’ signage right above the Duty Free section, I was decidedly hungry. 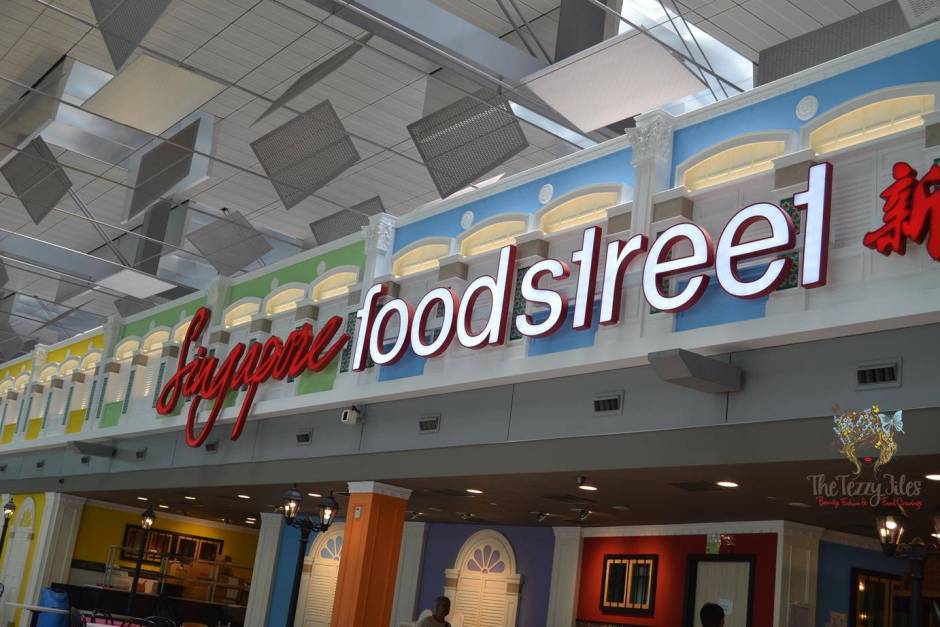 Made to look like the colorful chaos of street food stalls, this busy line of little restaurants looked very authentic and inviting. 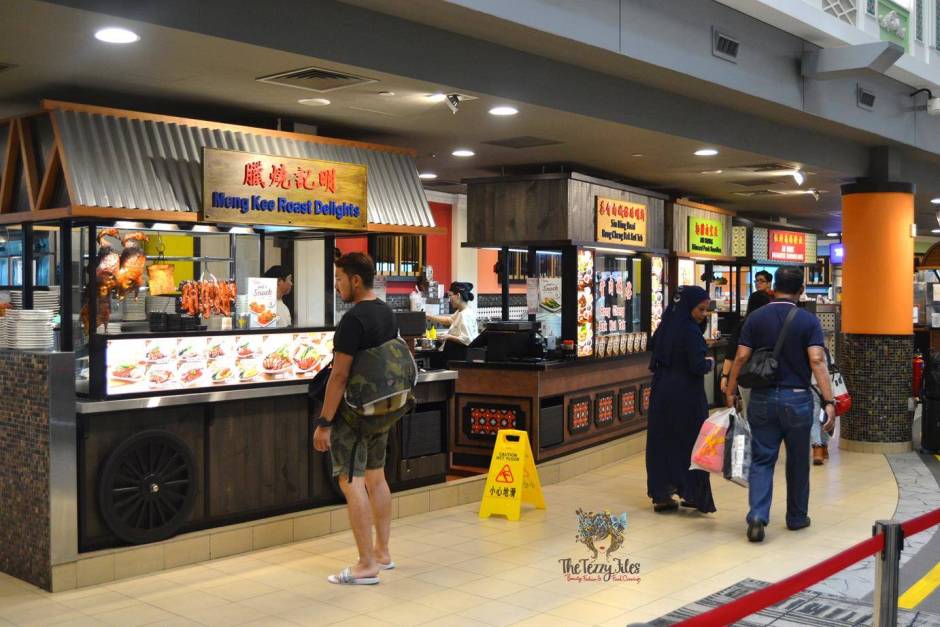 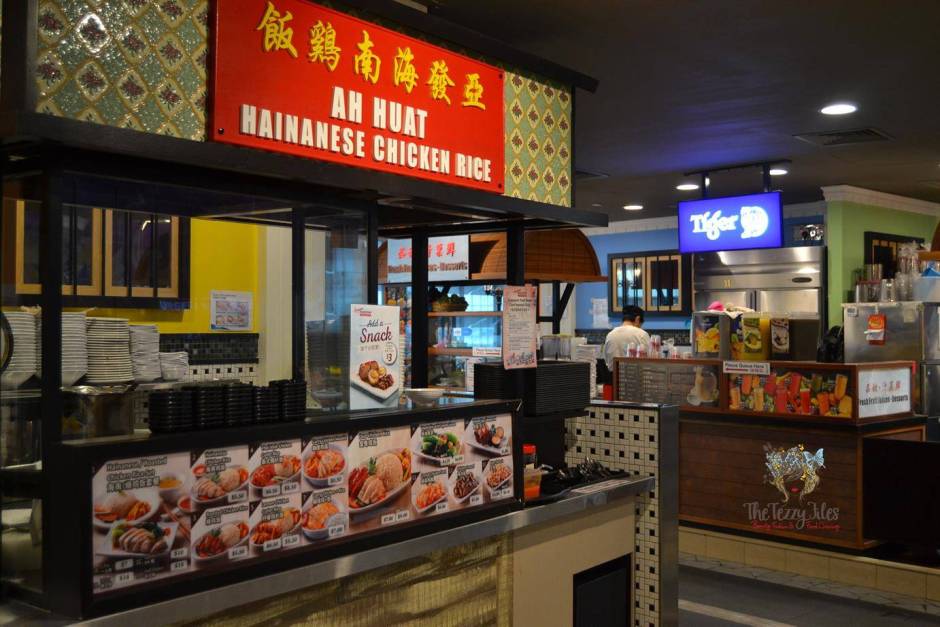 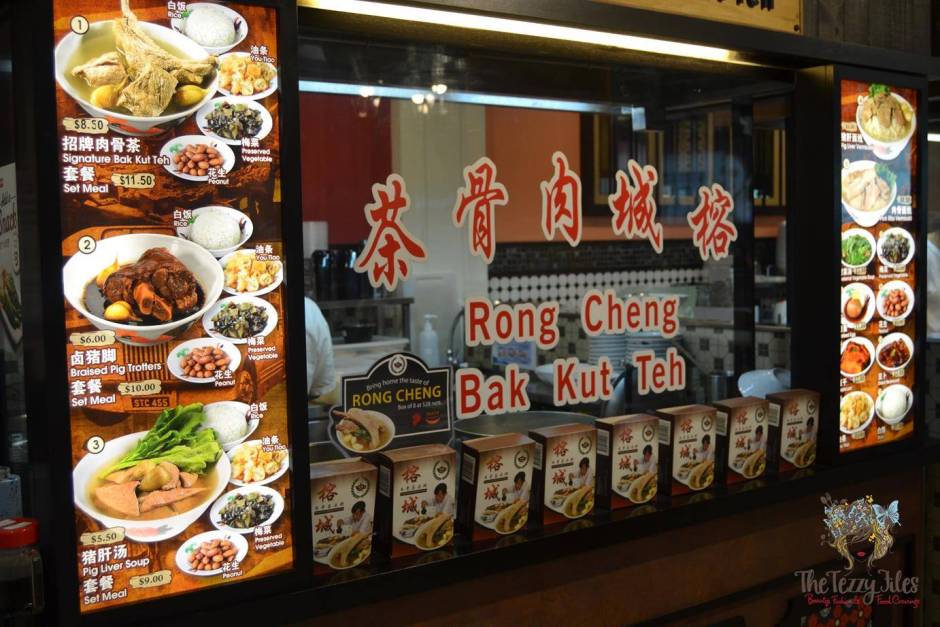 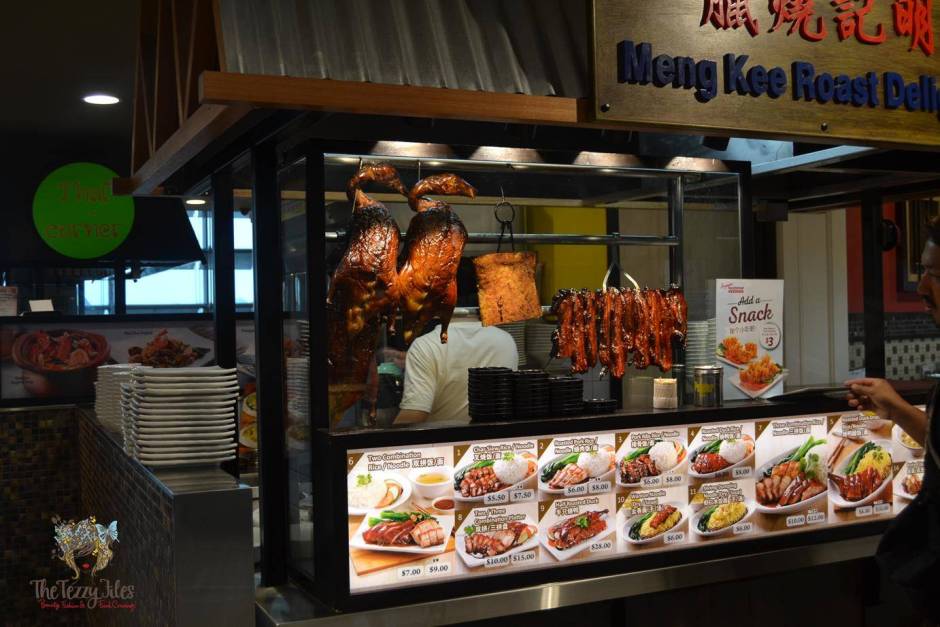 Customers need to buy a ‘Singapore Food Street Card‘ at the cashier right at the entrance of the ‘Singapore Street Food’ alley, and you can load it up with as much cash as you please. Apart from Singaporean Dollars (SGD), you can do this with credit cards or US Dollars as well. 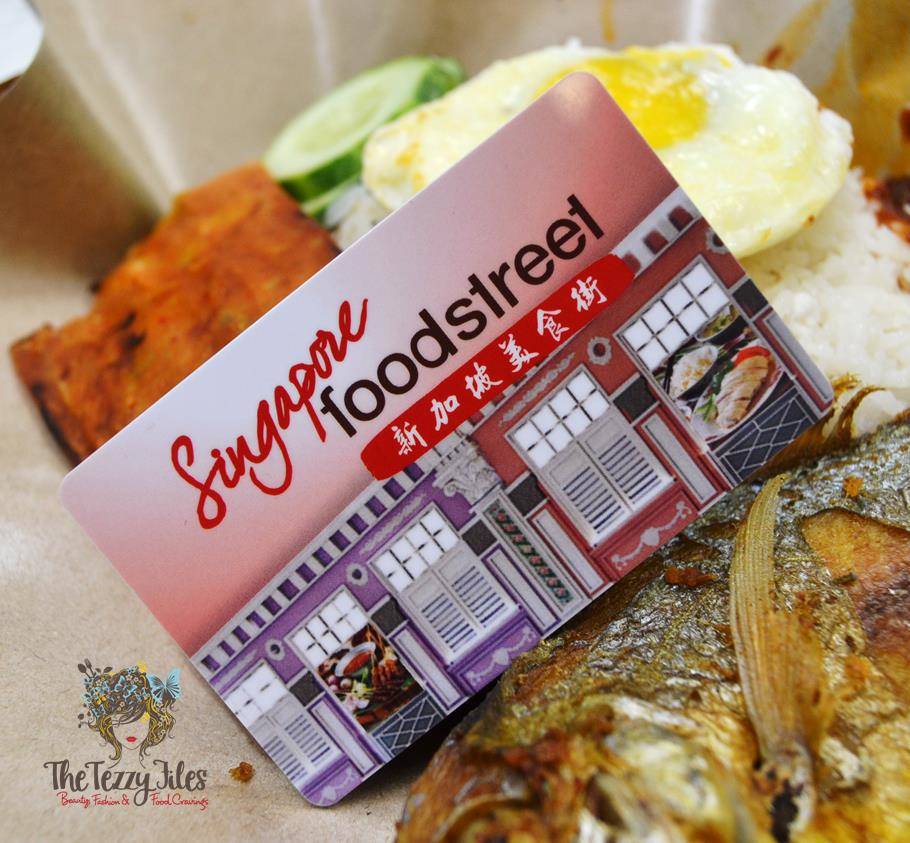 I felt a little cheated for having to do this as I had no idea how much cash I wanted reserved into this card. The food is very reasonably priced, and in hindsight, SGD 15 is more than enough for one person (this would cover a main dish, dessert and two drinks!).

I found a stall called ‘Fatimah Nasi Lemak’. It was here that I first spotted seafood baskets. 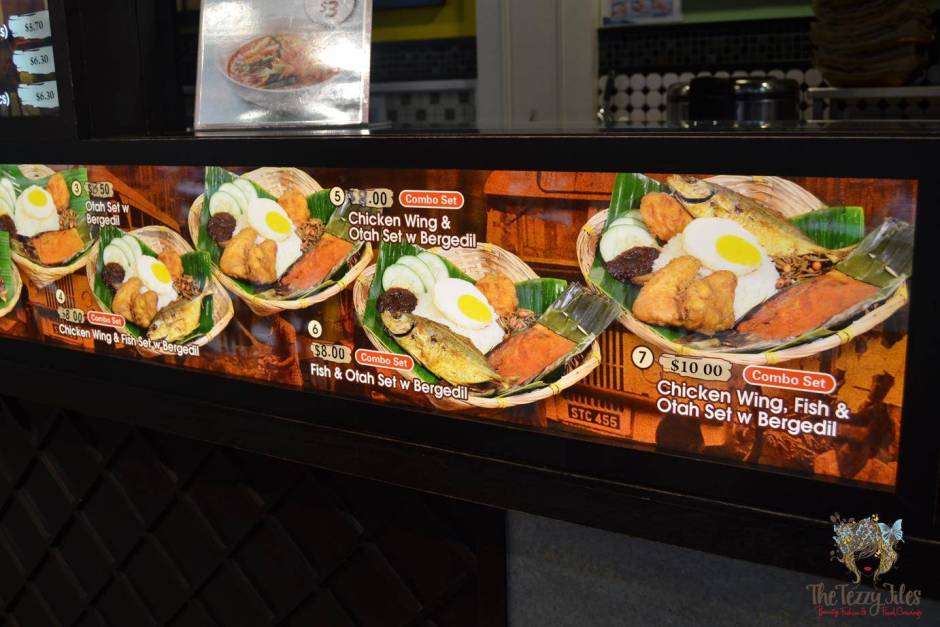 The platters on offer looked aesthetically South Asian, and I chose to have the basket below.

I was a little disappointed the platter was not served with the banana leaves as shown in the display. Also, the food was not freshly made, but served from the precooked smorgasbord behind the counter.

However, the deep-fried fish was still fresh, and the skin crisp and delicious.

I also enjoyed the Otah, a marinated piece of fish fillet traditionally steamed in banana leaf. It was mildly spicy, and had the scent of lemongrass.

You can’t see the Bergedil in my shot. My bad! I took this click super quick, and dug into it. Bergedil is a Malay potato patty, and went quite well with the fish, rice and the spicy, salty sauce that was served on the side.

The best part of this platter was the deep-fried anchovies with peanuts. Crisp, fishy and just a tad bit over the salty quotient, this traditional Asian treat is a pleasure to eat all by itself with plain rice! 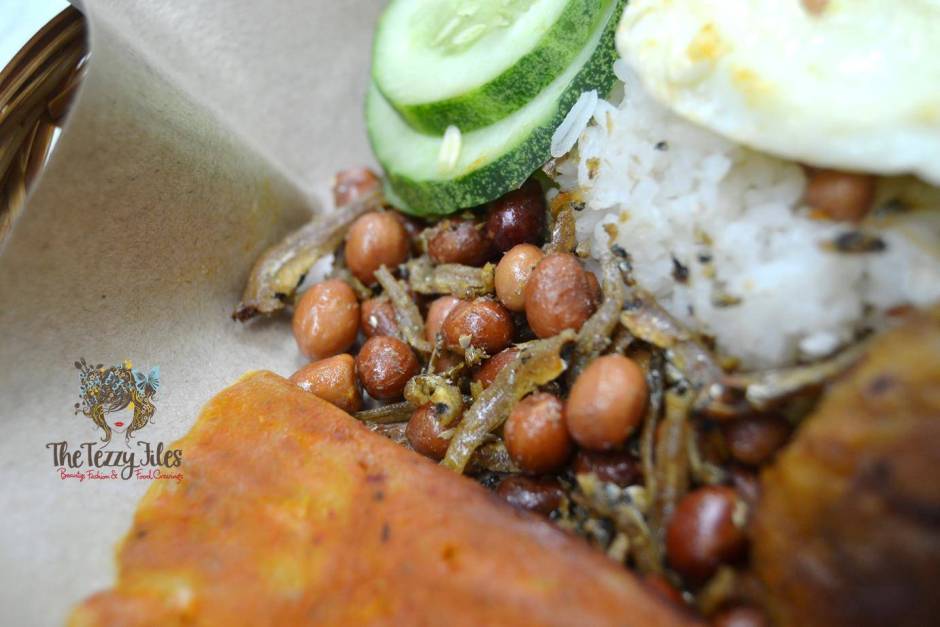 The only thing I didn’t like on this platter was the poached egg. Going by the display images, I was hoping for a runny yolk that would drip into my rice, but the one I was served was precooked from the smorgasbord, and lifeless like rubber.

For drinks, I decided to be a little adventurous and opted to try the Water-chestnut juice. 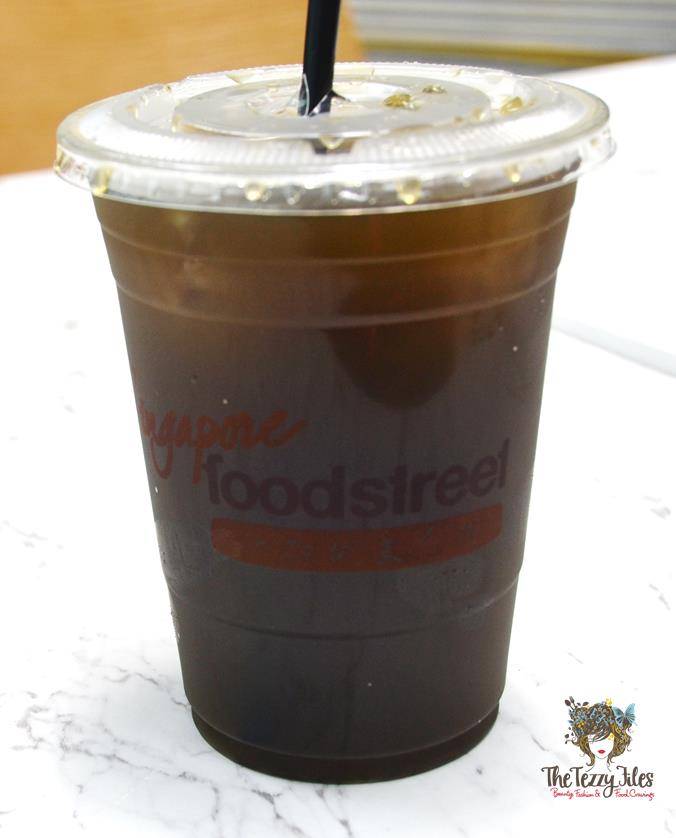 Bad, baaad idea. This juice tasted more like a glass of water with half a glass of sugar dissolved into it, and went untouched after the first sip.

I had an interesting jackfruit dessert. The base tastes like a slush made of condensed milk, and it is topped with jackfruit, a drizzle of syrup, and some pretty gelatin balls that are more for garnish than flavor. 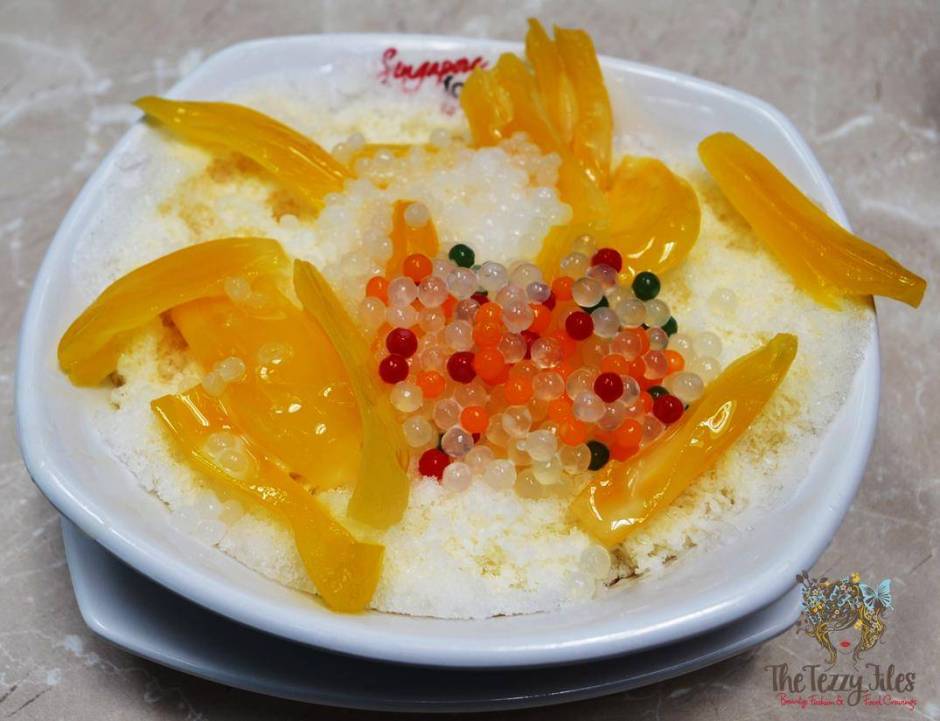 I would imagine this would be the perfect dessert for a hot summer’s day. However, I had just landed from a Kiwi winter, and couldn’t do justice to this bowl. Would love to have some right now as I type in sunny Dubai!

The menu said they also had this with Sour Sop, a fruit I have been keen on trying for a while now, but they were out of it.

After my meal, I decided to play tourist and go for a long walk around Terminal 3.

Changi airport is massive, and is made up of three terminals that are interconnected by the free airport shuttle and tram service. My flight back to Dubai was from Terminal 2, but I decided to stick to Terminal 3 as there seemed to be so much to see.

I spotted a giant Singaporean Chili Crab, and a bowl of Satay. 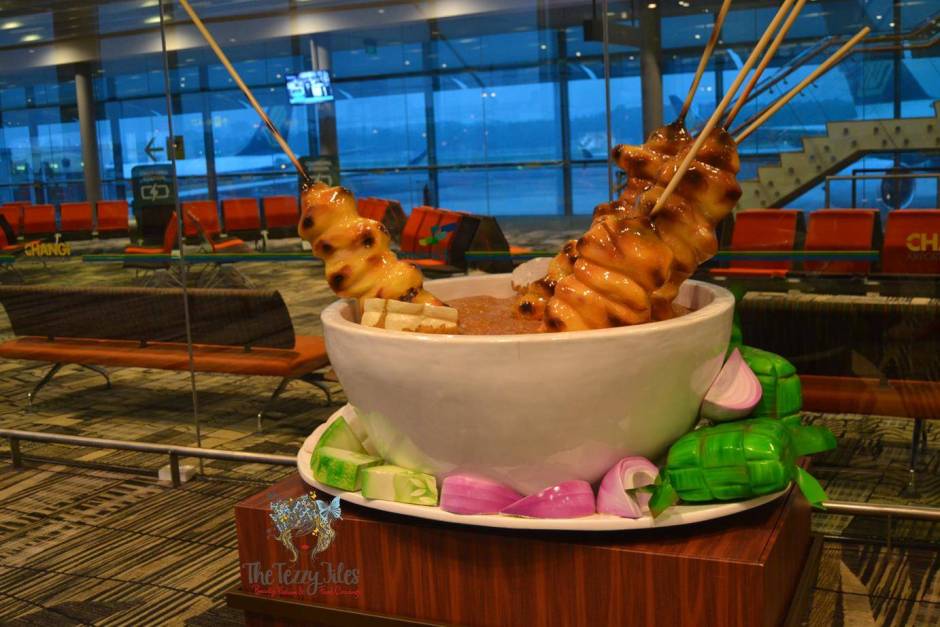 Changi Airport is overflowing with activity, and the busiest area of Terminal 3 is definitely Duty Free! If you are following me on Instagram, you’ve probably already seen the pretty souvenirs I clicked below. 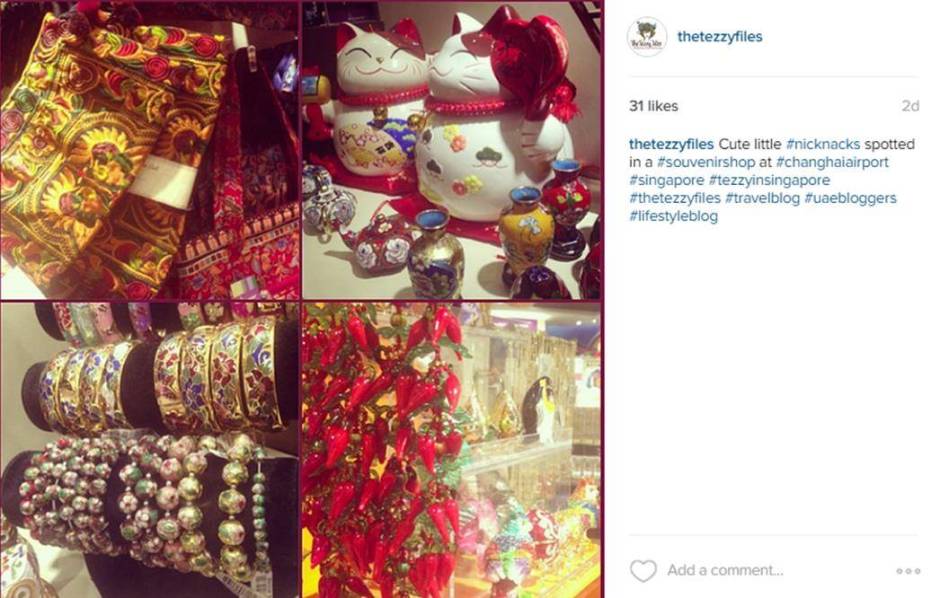 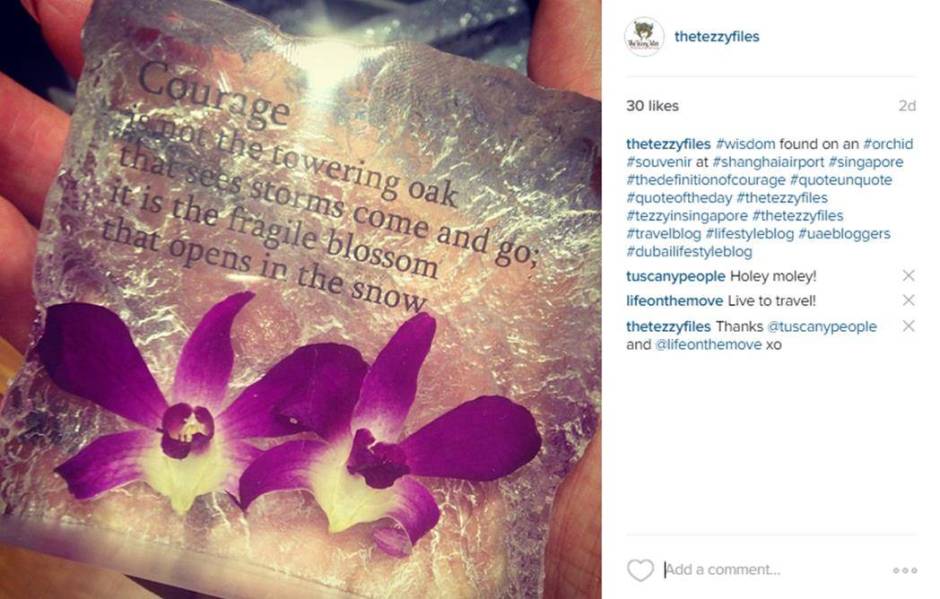 I also spent a significant amount of time browsing the beauty counters of Duty Free at Changi Airport.

The Asian market has some very interesting concepts that I haven’t seen here in the UAE. The Koreans introduced sheet masks to the beauty world, and there is an endless array of these here. One of the strangest I saw here was a snail sheet-mask. Not sure I’m too keen on smearing a snail on my face anytime soon!

I’ve heard rave reviews about the SKII skincare range. It is grotesquely expensive here in the UAE, and I was super excited to find an introductory box that is exclusive to Singapore for SGD $168.

I also treated myself to the Urban Decay Naked palette. Fell in love with the velvet casing! 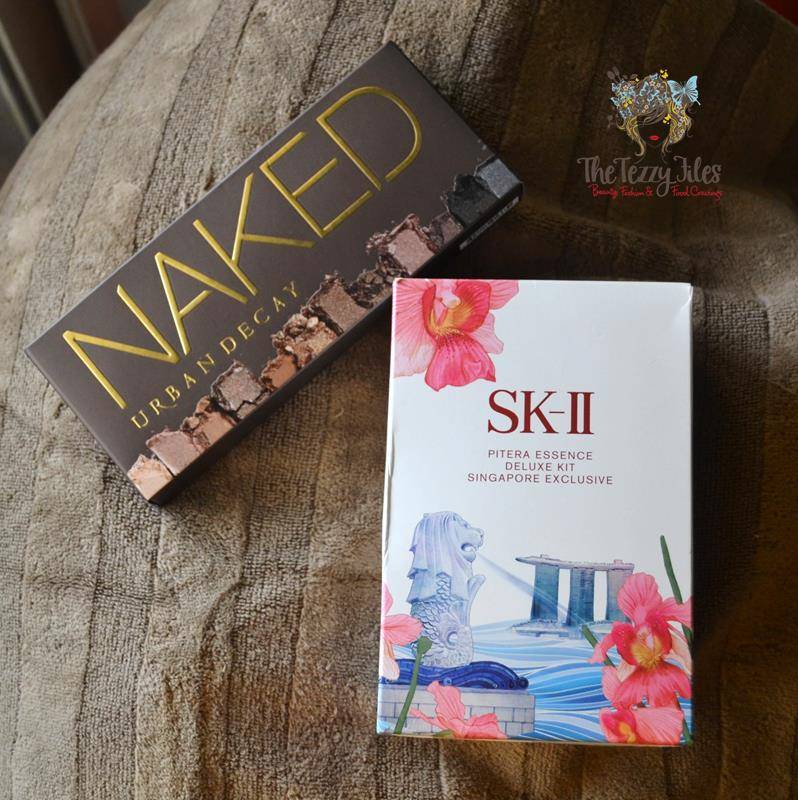 Beauty reviews on both the above products will be up on The Tezzy Files soon. Watch this space!

After my bout of retail therapy, I found myself a comfy corner and took out my laptop. Another hour passed with Skype calls to family, and then I decided to do some blogging.

Blogging is addictive! I sat there in my little corner and caught up with New Zealand posts I had missed. The posts on Romantiques and Palmy Foodie Haunts were done in Singapore 🙂

When I tire of writing, I read other people’s work! On this trip, I was carrying two novels. Not like I can finish both in one seating, but I like to switch to different styles of writing now and then. 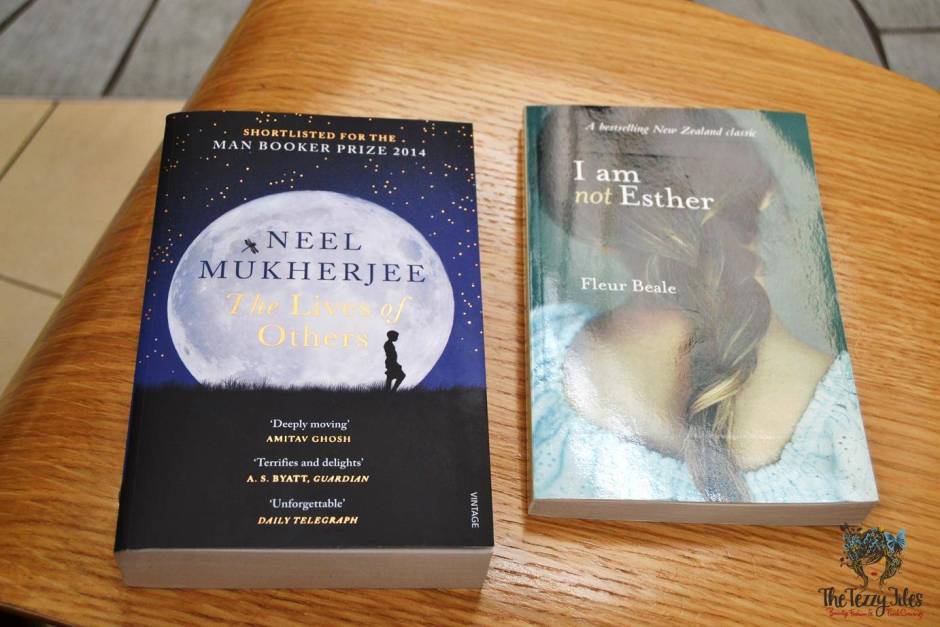 Before long, it was time to head to Terminal 2. This terminal has near-identical shops in its Duty Free as Terminal 3, but I couldn’t see a ‘Singapore Food Street’ here.

My 8 hour transit flew past pretty swiftly with my little rendezvous around the airport. I didn’t catch a wink of sleep, which was very well as I snoozed all the way to Dubai on the 7 hour flight.

Have you had long transits? How do you keep yourself entertained? 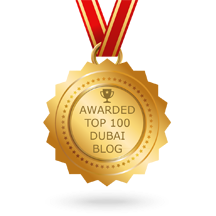 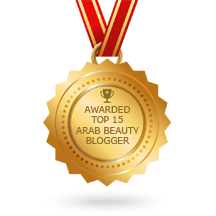